A Letter of Admission from the "Lender"

On April 22, 2011, In response to Plaintiff's Qualified Written Request, the Corporate Office at ONE
WEST BANK submitted the above document to Plaintiff Gary Mialocq on April 22, 2011.  It clearly states and affirms that ONE WEST BANK is only the SERVICER, and that Aurora  is the Investor/Master Servicer. This was identical to Plaintiff's description of ONE WEST  BANK advising him of the same information almost two years earlier in June, 2009. 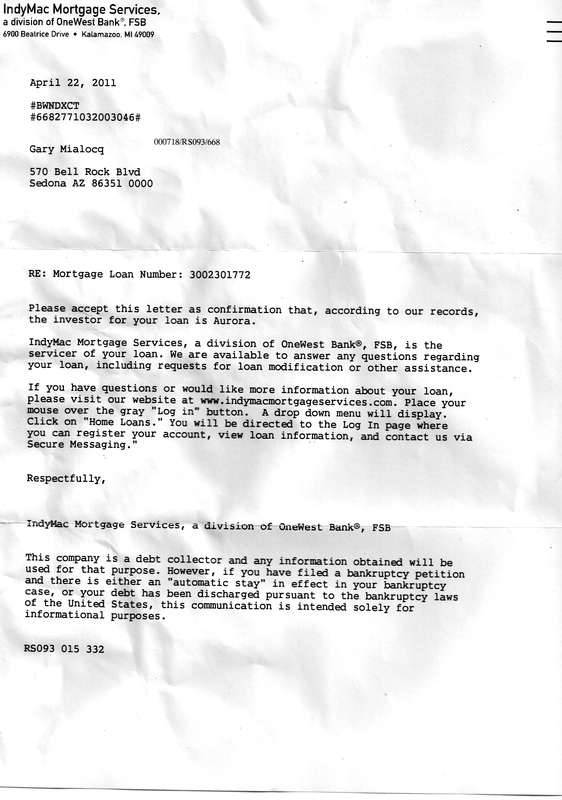 This is in direct contradiction of the sworn testimony of their attorneys in Court in March, 2010, that ONE WEST BANK is the Real Party in Interest and the holder of the Note.  By their own admission they didn't own the loan in 2009 and they don't in 2011.

In response to Judge Baum's Minute Order, ONE WEST BANK submitted the Seller Warranties and Servicing Agreement between Lehman Capital and IndyMac Bank, as proof of their ownership interest. In truth, their evidence proved the opposite. ONE WEST BANK claims they purchased “all servicing rights” from the FDIC. They lied. Actually they purchased all Servicing rights previously held by IndyMac Bank in Section 2.01, NOT MASTER SERVICING/INVESTOR rights which are clearly delineated in the original contract in section 12.12 to Aurora Loan Services, Inc.

If ONE WEST BANK was truly the real party in interest, it would not have to resort to employing a company such as Lender Processing Services who was under investigation for preparing fraudulent documents for lenders so as to help them to foreclose when they did not possess the proper documentation.  Why is this important?

WHAT DOES THE LAW SAY?

A. A person purporting to claim an interest in, or a lien or encumbrance against, real property, who causes a document asserting such claim to be recorded in the office of the county recorder, knowing or having reason to know that the document is forged, groundless, contains a material misstatement or false claim or is otherwise invalid is liable to the owner or beneficial title holder of the real property for the sum of not less than five thousand dollars, or for treble the actual damages caused by the recording.